Leave a comment Posted by Seán Crudden on December 24, 2010

Well this was a totally routine day for me and my energy was quite good even though, I think, I took no siesta. Walked over to the synagogue c 19.45 and let myself in with the key Vera Rice gave me last year. Turned on the heat and the lights. Slipped the Tia Maria out of my Bugatti overcoat pocket and passed it to Ann Murphy. “I got that specially for you yesterday,” I told her. “You should not be doing that,” she remarked. Anyway the most of the choir except Seán Caraher, Fidelis, Anthony Rice, turned up and the practice which lasted until after 21.00 went well. Ann lowered the keys a half tone or so and I had no difficulty reaching the high notes except maybe in When A Child Is Born. “You can help a lot there,” I whispered to Marie McDermott after Silent Night, “with those high notes. A lot of people cannot get up there.” Marie was talkative and friendly tonight. Let’s hope a good dress rehearsal does not lead to a poor performance. Ann left a penciled note in the vestry asking the priest to announce that the choir would begin singing at 09.15 on Christmas morning, Saturday. Fr. Larkin ignored the note tomorrow night. Ann broke up in smiles when I remarked coming out of the vestry, “If he is looking for a row, I will answer him back!” Apparently she is as paranoid about Fr. Murphy as I am? I postponed my journal entry and went to bed tired sometime before 00.00. I got a lot of work done today on the cooleyehg site uploading photos of the graduation and of Santa’s visit to Greenore Golf Club on the latest news page. I also penned a short tribute in English and Irish on the latest meeting page to Edna Murray and tidied the page up. Tried to redesign things with red headings over green writing. Heard from Suzie Lambe that Dermot Traynor has had a large tumor removed from his bowel. Dressed in vest and briefs, black/grey Mizuno gansy, grey braces, grey small check slacks, black Calvin Klein socks, grey Grensons, white Le Coq Sportif T-shirt, thin brown rimmed spectacles; I sat and pontificated ex cathedra (my Parker Knoll) about hospitals including the mental hospital, working on Christmas Day, turkey station, bronze v white turkeys, incubator, Silvia’s sons, Bronagh Kirk; as the low warm sun streamed in the door of the White Elephant Lounge across the snow outside. Our visitor Josie Malone in great form sat in the sun at the door by the blazing fire and listened to me like a favorite student. She agreed to pass on to Silvia two snaps of Silvia I gave her in a used open envelope. I noticed she folded down the top of the envelope. A sort of a gesture towards confidentiality or secrecy? We all had a sup of ersatz Bailey’s. Warm, bright scene. Josie and Rosanna exchanged small gifts.

Leave a comment Posted by Seán Crudden on December 7, 2010

Well it’s approaching midnight on Monday now so I am not going to try to detail every little item about Sunday. I got up in reasonable time to perform in leisurely fashion my full matutinal routine. It was a bright calm sunny morning and although it was surrounded by snow the house was warm on the inside. Dressed in underclothes, navy Le Coq Sportif T-shirt, green collared expensive T-shirt, non-descript old track suit top, brown patterned braces, black shiny slacks, black Umbro sports socks, black Hush Puppies’ brogues. Rosanna gave me a fine chicken dinner even if the chicken was a bit bland although there was stuffing made with bread and onions. I took my camera and a spare set of batteries in my pocket. Dessie, in his van, took the Carlingford turn just in front of me. I parked at the door of the Tourist Office and went inside where the attendant behind the desk scribbled the letters Q&A on a postcard and handed it to me. I walked gingerly through the village carrying my camera up to the Heritage Centre. Dessie’s van was parked in the disability parking spot outside the chemist’s near the top of the hill just before the corner going to Holy Trinity. I had put €19 petrol in my 2010 Toyota iQ in Bellurgan Service Station and paid €1 for a Snickers Duo. I offered some of my Snickers Duo to Conor Duffy. He declined but Dessie accepted. Dessie ate one piece paying little attention to the chocolate; I ate the other piece and enjoyed it. I was in good form and was delighted to see Dessie and Conor. We relaxed for 10 minutes or so and then Rowan Hand moved us up and we sat on our left in the second row from the front.” “If anyone throws anything at us we will duck and it will hit you,” I said to the psychiatrist in the row behind. Anyway the discussion got going rather turgidly. After a while I made a speech on the subject of “myth.” That livened things up a bit. I chanced my arm later on towards the end and addressed the topic of “peace” drawing heavily on a description of the Agnus Dei as it is done in Jenkinstown. I do not know how much Conor caught on his video camera. Dessie and I pissed against the back wall and then we came back in we pissed in the toilet stage right which Dennis Bradley had, by then, vacated. I took a picture of Dessie and Fr. McVerry in the center aisle. Walked on down to Dessie Savage’s and hung around for the ceremonial switching-on ceremony. The Christmas lights. I spoke to Liam Reilly and offered assistance on the basis that he is the most likely candidate for Fianna Fáil in the next general election. Took 34 snaps. Piddled in McKevitt’s. Sang a verse of Silent Night with the small choir. A stout girl standing beside me with a hymn sheet I could not read because I was wearing my distance spectacles. She seemed amused and pleased with my efforts and her body language and attitude was supportive and good-humored. Dessie later contemptuously dismissed the effort as a “school-child” one. Anyway he spirited me off to his van at the top of the hill let me out at the dispensary car-park turned laboriously and headed for Greenore. I piddled in the toilet at the back of the car-park in the semi-darkness and set out for Seán Óg’s house in Greenore where the heat was not on but everything seemed in order. I made tea and toast in Dessie’s with brown pan bread and jam. Delicious. I ate two slices; so did Dessie. Dessie rustled up a fine feed of chips, big thick salty rasher of bacon, fried tomato. Both of us were in good form and discussed Deirdre Lewis rather lasciviously. And others. Anyway I did not hang about and departed to make a 18.00 deadline home. Parked outside Brian Larkin’s and checked Óg’s again. Heat on. Exchanged a few remarks with Brian Larkin’s daughters who made a fine picture in the lamplight walking with their coats and a dog up the street towards their house. Warm and happy encounter. I forget what I did for the rest of the evening. I ate an orange. Tart. Also ate corn-flakes and milk. Conor Keelan the mayor of Dundalk and Mick Murphy mayor of Newry jointly switched on the lights. Said hello to Sean Ó Roideán and also Noel Fretwell in McKevitt’s. Graham McDowell holed a 20’ putt on the 18th for a birdie 3 after hitting a tree with his drive to tie Tiger in Tiger’s own tournament. He holed out again, in the playoff, from 20’ to slay the Tiger with a birdie the great man could not match from 15’. McDowell had started the round 4 behind Tiger. I think it was well after mid-night before I got to bed and I did not drift off to sleep until the wee small hours. Eamonn was supposed to come out from Dundalk today but he changed his mind because he had a lot of work to do. I wore my Lacrosse grey jacket round Carlingford and my green woolly Greenore helmet. It was cold. I had a few problems uploading the snaps from my Fuji FinePix 9500 S onto my Dell but got it done in the end. I probably surfed a bit as well, horoscopes, etc. 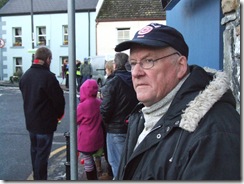 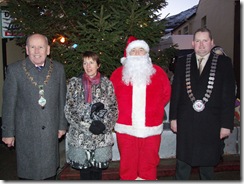 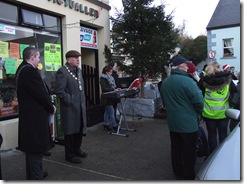 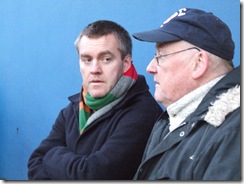 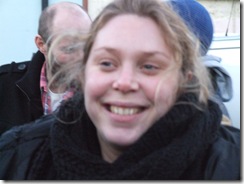 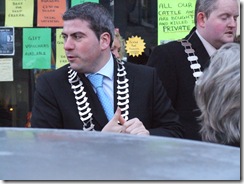