Leave a comment Posted by Seán Crudden on August 25, 2011

Spent all day getting to know the Canon Aisling brought down to me the last day she was here. Put the driver for the camera on the Dell and downloaded all the images from the camera. Printed 6 x A4 pictures. E-mail from Kevin McGeough. Will not attend IMPERO Saturday and will not meet me for coffee tomorrow. Doing a job on his house; filling a skip. Yet he plays golf starting at 09.00 on Saturday morning. I sent out an e-mail confirming meeting of IMPERO in the golf club @ 14.00 Saturday and sent a message to the club about it through their web-site. Sweet William flourishing outside the front door. Snapped some blooms on macro setting. Very colourful. Aisling returned my call. She flies to Uganda on Thursday to visit Paul. Dressed in Camel Active sandals which Peter Oliver (River) Jordan delivered today. Silver Robbie slacks, fawn and gray/green FootJoy T-shirt, black/green/red braces, glasses. Dried on the line the shirts and articles I washed yesterday in the washing machine. Phoned Dessie. A lot of meaningless talk. Washed teeth and read my journal for a while in bed before lights out. Cleaned out and lit ½ fire this evening. Also watered the pots, boxes, baskets; I think.

Leave a comment Posted by Seán Crudden on August 25, 2011 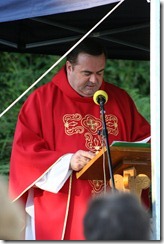 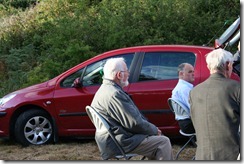 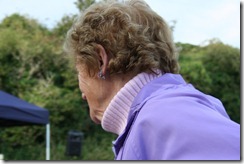 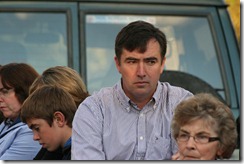 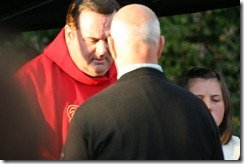 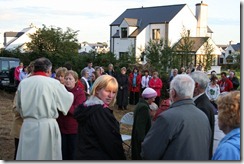 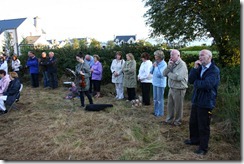 Leave a comment Posted by Seán Crudden on August 9, 2011 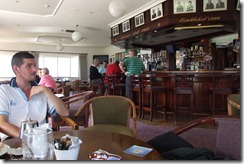 Not too wrecked after golf yesterday. Made my bed, exercised, showered. Dressed in black Ping long-sleeved golf shirt, sliver Robbie slacks, black Calvin Klein socks, grey Grensons, blue boxers, glasses. Played 18 with Paul Smyth, Seamus McBrearty; starting at 12.20. Wind increased alarmingly and it was almost impossible to stand on the 12th tee. However it was bright, not cold; and there was no rain. Paul (17), 29 points; Me (14), 26; Seamus (23?), 23. Paul ate brown bread and soup in the bar while I drank a pint of iced water and took some photographs including one of Paul and Hugh Murphy. Seamus tucked in to tea or coffee and a toastie. When we sat down at first I shared my Snickers Duo with Seamus. Could not leave Paul home because his gear would not fit into my iQ on top of my own. Rosanna pulled up just as I was leaving the club. She was going to play with Josie Malone. I took salmon wellington and a plate of salad out of the fridge, buttered some bloomer bread, brewed a mug of tea. Scoffed all. Left my trolley with Brian Kerley in GreenLife. He promised to give me a loan on Wednesday of his own trolley until mine is fixed which will apparently not be soon. “Tell them to give you a new trolley!” Rosanna insisted. Bought oranges, ciabatta bread, Kilmeaden cheese in Tesco DSC on my way home. Looked at some of the packaged salmon, etc. Prices scary? Journalled. Read my journal for June in bed before lights out. Had brushed my teeth and dentures before I retired to bed. E-mail from Michael Rice dampened my enthusiasm. Because of a large entry (sic) my entry into the CLCVF photo competition was unsuccessful.

Trundled out to Concra Wood early for my 12.50 start in the Seniors’ Open. Purchased a tank of petrol, €31, and a Snickers Duo on the way in Bellurgan Service Station. Clocked in in the pro shop and sat in the bar for a while munching my way through the Snickers Duo. €25 entry paid with my MBNA Visa card. Read through the local rules on the back of the card and looked at the yardages. Played off the green tees with Daniel a thin man, a diabetic, from Elm Park; and David and Philip two sturdy gentlemen and good golfers from Glengormley. I thoroughly enjoyed my round and we all agreed Concra is a lovely layout. I sweated in my long sleeved black Mizuno golf gansy and not wearing a glove the driver was insecure in my hands and slipped on the 10th tee where I pulled my drive to the left high into the tiger rough hopelessly lost. Otherwise I struck it well including one sdtbm on the last where I struck a 5-iron second pin high to the right of the green. Nice chip and a short down-hiller for a 4 to finish. Holed a nice 5’ side hill putt on the 9th green. 28 points. Daniel whose card I marked scored 22. The two strongmen scored 31 each playing quite good golf. I read tomorrow that 44 or 45 points won! Took a nice shower in the airy big bright locker room and changed my clothes taking off the dark stuff and assuming a white long-sleeved Ralph Lauren semi-polo shirt, dark striped braces, black boxers, silver Robbie slacks and belt, fawn cotton non-elasticised socks, brown zip ankle boots, glasses. Drank a pint of iced tap water in the bar and ordered the dearest item on the menu, a sirloin steak, well done. Lovely chips melting in the mouth, nice cream pepper sauce, a large grilled mushroom, a halved grilled tomato, fried onion. I masticated it all with relish except the mushroom. Very tempting, I told the coolly efficient and very personable attractive young waitress, but I thought the safest thing to do in light of my allergy was to leave it behind me on the large rectangular plate. The steak cost approximately €25 and I also drank a lovely pot of coffee, €2.50. Michael O, James McCormack, Eugene Woods, Peadar Gallagher; came in to the bar while I was polishing off my steak. “I don’t believe you!” I said to James McCormack when he rather grudgingly volunteered that he is two years older than me, “I’d have to see your birth certificate.” Paid with my MBNA Visa card no problem. The woman at the desk pleasant and prepared to chat in a business like way. It must have been 21.00 when I reached home. Rosanna had already returned on the train from Dublin where she had rendezvoused with Aisling and visited Óg’s house. I think we talked golf comparing Greenore unfavourably with Concra. As usual I was a bit on tenterhooks all day paying attention to detail and striving to make no wrong moves or forget something. But I had a really enjoyable and fulfilling day in a remarkable place. A young lady from the Irish Independent rang my mobile while I was eating and tried to pump me about Sellafield. I putted a round with 2 or 3 balls on the putting green before teeing off and my putting today was a lot more solid than usual. More ambition and more care than is my wont. The ranger kept in touch especially towards the end of the round. Very easy to get on with, nice to talk to, sensible, a good sense of proportion. Philip Clarke used a belly putter and sank a few long ones at the start including a birdie at the first where I scored 6. I had a shortish one for birdie on the first downhill feature hole where I had only a short pitch with SI from the middle of the fairway to the green; but missed. I made a mess of the 15th hole where my drive struck the far bank and rolled back into the lake. Daniel stuck to me and entered my score on the computer. I read out the numbers off his own card and mine for him to key in to the computer. All very efficiently done with no angst.