Leave a comment Posted by Seán Crudden on September 1, 2011 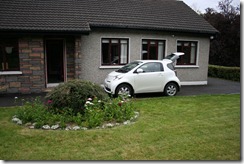 Exercise, shower. White T-shirt, black Bruhl 42” slacks, black/red/green braces, grey Rival sports socks, heavy Connolly walking boots. 3 weetabix, sliced banana, millk; for breakfast. Mowed the front lawn. Weeded around the Sweet William and trimmed the hanging shoots of the cotoneaster. Later took a few snaps with the Canon. Trimmed the currant hedge. Salmon salad, Panini bread, orange; for lunch. Rosanna drove us in my iQ in to Oaklawns. Bought McVities’ shortcake in the shop on St. Alphonsus’ Road. Saluted Paddy Donnelly as we turned the corner in to Oaklawns. He was walking in a suit on the footpath on my side of the car. Made tea and ate 3 shortcake. Rosanna quickly and carelessly mowed the grass front and back. I trimmed the hedge with the Bosch hedge cutter and used the Bosch strimmer to tidy up at the front. Rosanna played 6 in the morning and 12 in the evening; in Greenore. Text’d Aisling in Uganda. She replied. Africa wet and interesting she asserted. In a text Eamonn told me he is returning to Dundalk late tonight. Watered the boxes, baskets, trays, pots. Dead headed the purple trailing plant in the white pot hanging on the right as one enters the back door. I spent a long while at it using the golden Toledo scissors. E-mailed Erik, Gabriela, Tina. Uploaded on the Acer some photos of myself, the iQ, the Sweet William; from the Canon’s memory card. Bought a mid-sized black 4 wheeled case in the Leather shop on the way home from Oaklawns. €99 – €9 concession = €90. I paid €1 parking for 45 minutes outside Partnership Court. Lit fire c 19.30. Worked on the computers until bedtime. Soaked my dentures in Steradent. Brushed my 5 ½ remaining teeth. Read some of my journal for June before I went to sleep under my duvet with one ventilator open in my bedroom.